Finland’s transmission system operator Fingrid Oyj and its partners are planning to build a new 400 kilovolt underground power cable in Helsinki. The tentative route planned for the underground cable extends from the Länsisalmi substation in Vantaa to the Viikinranta energy block in Helsinki. Field surveys will be conducted along the route in the spring and summer. They will help plan the exact location and future construction of the cable. 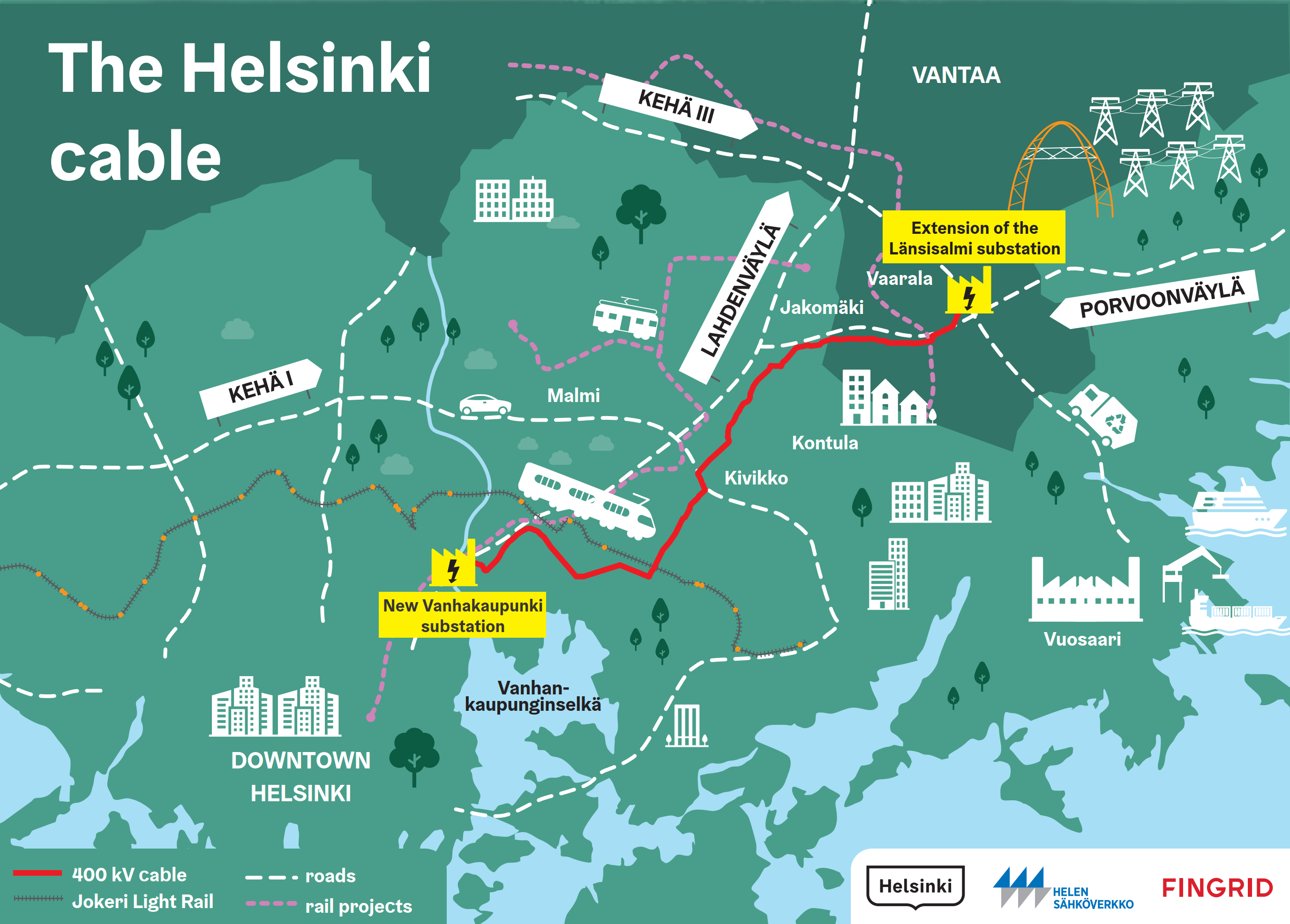 The tentative route of the new underground cable is indicated in red on the map. © Fingrid Oyj

The new power cable connection will strengthen Helsinki’s electric grid and support the carbon neutrality goals of Helsinki and Helen Ltd. It will contribute to the transition to carbon-neutral energy generation by 2030 and help increase electric traffic.

The project will also make it possible for the City of Helsinki to build new residential and commercial areas on the other side of the city, namely in the Vihdintie and Huopalahdentie area. The 110 kilovolt high-voltage overhead lines located in this area can be placed underground once the electric grid has been strengthened. This will free up space under the overhead lines for urban infill.

The City of Helsinki, Helen Electricity Network and Fingrid launched the general planning of changes to the electric grid at the end of 2020. During this general planning phase, the parties have determined alternative routes for the cable connection between Viikinranta and Vantaa’s Länsisalmi. The City of Helsinki has also started planning ‘the Viikinranta energy block’ in order to build a new substation for the main grid.

Based on surveys and negotiations with authorities, the planners consider the best option to be a route through areas owned by the cities, from the Viikinranta energy block via Viikki’s fields, Hallainvuori, Ring I and the Kivikko Sports Park to Länsisalmi. The final route of the underground cable will be specified during the construction planning phase to be launched this year. Fingrid is planning the route in cooperation with the Cities of Helsinki and Vantaa as well as authorities and other parties.

As part of the general planning of the route, the planners have assessed the technical feasibility of construction as well as the impacts of construction on land use, traffic safety, housing, the landscape, cultural heritage, nature and recreational use. You can find a report on the planning phase on the project website at https://www.fingrid.fi/en/grid/construction/the-helsinki-400-kilovolt-power-cable-connection/.

During more detailed construction planning, the planners will create more specific plans on such things as how the impact of the construction phase on the environment will be minimised. In nature areas, the cable will run below structures such as existing pedestrian routes as much as possible. Having the cable run primarily along Lahdenväylä is not possible, as the planners believe that constructing the cable route from Lahdenväylä would hinder the safety and flow of traffic.

Fingrid is currently conducting field surveys along the cable’s future route to lay a foundation for construction planning. The aim is for the plans to be completed in late 2022, after which the City of Helsinki, Fingrid and Helen Electricity Network will decide on investments. Fingrid aims to build the new cable connection and Viikinmäki transformer substation by the end of 2026.

As the project progresses, Helen Electricity Network aims to take its overhead lines near Vihdintie and Huopalahdentie underground in the 2020s to allow new residential and commercial areas to be built in the area. Additionally, the company will replace the Pitäjänmäki substation with a new substation that will be built near the existing one. This will also enable urban development on the current substation plot. The preparation of the detailed plan revision concerning the new substation started in March.

The City of Helsinki will continue planning in the Vihdintie and Huopalahdentie area in stages during the 2020s. The plans for the area include housing, transport connections and services for some 14,000 new residents.