EstLink 2 has been handed over to its owners and made available for commercial operations on 6th of February.

The Finnish TSO Fingrid Oyj and the Estonian TSO Elering AS have launched preliminary planning for the construction of this second high-voltage direct current (HVDC) interconnection between the two countries in spring 2009. Fingrid has also made a conditional capital investment decision on Estlink 2 (19th of May 2010).

The impacts of the project on the water system and fishing industry in the sea area were analysed during the summer and autumn of 2009. The cross-border line permit, the permit required by the Finnish Water Act, the expropriation permit http://www.maanmittauslaitos.fi/toimitukset/lunastustoimitus-nikuviken-anttila-estlink-2-porvoon-kaupungissa and the economic region permit for the direct current link were obtained from the authorities in November and December 2010. 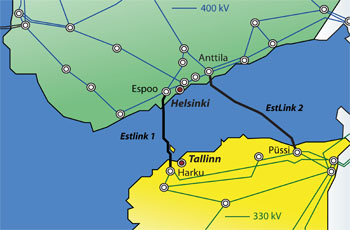 The EstLink 2 HVDC interconnection between Finland and Estonia has transmission capacity of 650 megawatts, which increases the total transmission capacity between the countries to 1,000 megawatts. The total length of the link is approx. 170 km, some 14 km of which is overhead line in Finland, about 145 km submarine cable laid on the bottom of the Gulf of Finland, and about 11 km underground cable in Estonia.

The budget of the project is around 320 million euros, which will be shared between the parties. The Commission of the European Union has confirmed that the construction of EstLink 2 will receive 100 million euros in investment subsidy from the EU as part of a more extensive economy recovery package.

The sole responsibility of the EstLink2 publication lies with the author. The European Union is not responsible for any use that may be made of the information contained therein.