Fingrid has updated its estimate of the adequacy of electricity in the coming winter: Changes in strategic reserve and the availability of imports

Fingrid has updated its estimate of the adequacy of electricity in the coming winter based on changes in the Energy Authority’s peak load reserve decision and the power balance in Southern Sweden. The situation is largely unchanged in other regards, as war continues to rage on European soil and the energy market remains in an extraordinary state, causing uncertainties around the availability of electricity. As a result of these great uncertainties, people in Finland should be prepared for power outages caused by possible electricity shortages this coming winter.

The power balance in Finland is the same in this updated assessment as it was in Fingrid’s first estimate, which was published on 22 August 2022. The Energy Authority decided to discontinue the procurement of strategic reserve, which was earlier estimated to offer a capacity of 600 megawatts. However, the available domestic supply on market terms is expected to increase correspondingly – by approximately 600 megawatts – as some of the power plants that were included in the previous peak load reserve season will now be put on the market. For example, Fortum has taken steps to prepare the Meri-Pori power plant for commercial operation. 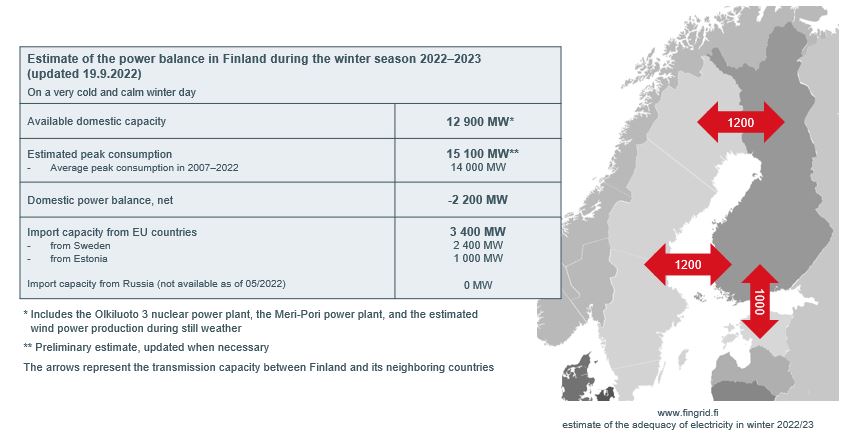 Figure: Estimate of electricity production and consumption for the winter season 2022–2023 in a situation where the electricity system and market function without problems.

One significant factor affecting the adequacy of electricity is the availability of imported electricity, as Finland has imported substantial amounts of electricity from Sweden and Estonia during times of peak consumption. The availability of imports from Southern Sweden was impacted by the announcement of a delay in the maintenance of the Ringhals 4 nuclear power plant, keeping it offline until the end of January. Consequently, the Swedish transmission system operator, Svenska kraftnät, has warned of an elevated risk of power cuts in Southern Sweden.

In peak consumption situations, the normal operation of the electricity market and demand-side management when prices are high help the system operation. Simultaneous disturbances at significant electricity generation facilities or in electricity transmission connections can pose challenges to the adequacy of electricity. A severe frost period, which simultaneously affects Finland and other countries in the Baltic Sea region, causes a particularly challenging situation. In such cases, electricity consumption is high, and the availability of electricity imports can be jeopardised.

Fingrid will update its estimate of the adequacy of electricity for the coming winter as the situational picture changes.

Information about electricity shortages and how they are handled >