Construction begins on the Aurora Line, a new electricity transmission link between Finland and Sweden

Fingrid and the Swedish transmission system operator Svenska kraftnät are jointly preparing a new electricity transmission link between Finland and Sweden. Construction of the 380-kilometre transmission line, known as the Aurora Line, and the substations required for the project will begin this year in Finland. The contracting agreements for the first phase have now been signed.

The 400-kilovolt AC connection will be built in two phases. The first phase will begin in autumn with the construction of the Finnish section of the transmission line from Muhos to Keminmaa.

The total value of the signed contracts is EUR 50 million, and the work is due for completion by the end of 2024.

A contract-signing event was held in Fingrid’s office on 15 June.

“Fingrid’s most important transmission link project this decade is now entering implementation, the culmination of long-term work to reach this stage. The project will be fully complete by the end of 2025,” says Timo Kiiveri, Senior Vice President, Asset Management at Fingrid.

“The Aurora Line is one of our spearhead projects. This is the continuation of our long-standing partnership with Fingrid on demanding 400-kilovolt main grid projects and our project in Muhos, where we are finalising Fingrid’s Forest Line project,” says Joni Parkkinen, Vice President of Transmission Networks at Enersense.

In connection with the project, Omexom (Infratek Finland Oy) will build a new 400-kilovolt substation in Viitajärvi to connect the transmission line to the rest of the main grid. The Pyhänselkä substation has already been expanded to cater for the Aurora Line as part of the Forest Line project. The Forest Line will contribute to strengthening the electricity transmission capacity from north to south.

“It is great to be involved in building a significant main grid connection. We have been working with Fingrid for a long time, and this project is a good continuation of the other substation projects we have carried out for Fingrid,” states Arto Ellilä, Business Unit Manager, Substation Projects at Omexom.

As part of the project entity, Hitachi Energy will also build a new series compensation station in Isomaa, which is about 60 kilometres north of Pyhänselkä.

“It is important for us to be involved in supporting Fingrid in the construction of a robust and reliable grid. The project is a continuation of our important collaboration to reinforce the transmission grid,” says Anders Zittra, Vice President at Hitachi Energy.

The connection, which will be fully complete in 2025, will run from Muhos in Finland to Messaure in Northern Sweden. When it is completed, the Aurora Line will increase the transmission capacity from Finland to Sweden by approximately 900 megawatts and from Sweden to Finland by approximately 800 megawatts. The investment costs of the work in Finland are EUR 85 million. The total costs of the construction phase of the joint project amount to EUR 254 million.

In January 2022, the European Union granted EUR 127 million of aid for the construction of the Aurora Line under the Connecting Europe Facility. The aid agreement was signed at the end of April, and the first aid payment was made in June.

The EU has identified the Aurora Line as a project of common interest that will benefit several EU countries in the Baltic Sea region: it will enable more renewable energy in the Nordic region, as well as in the Baltic Sea region more broadly. The new cross-border connection will also enhance the efficiency of the European electricity market by reducing the substantial, long-standing price differences between the Nordic and Baltic regions. At the same time, the connection will improve the security of the energy supply in Finland and accelerate the green transition. 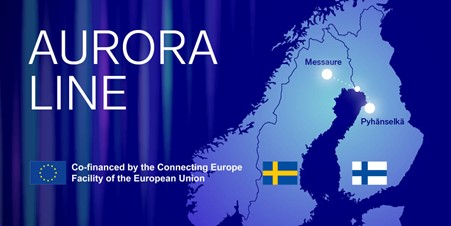